History of the City of Orange

The city of Orange, Texas, officially came into existence in 1836, the year Texas won its independence from Mexico. However, its history, like that of the Lone Star State, goes back many years prior to that memorable date.

The area's first known inhabitants were the Atakapas Indians, who arrived in the area around the year 1600. They lived mostly on seafood and wild game and worshiped ancestors who they believed came from the sea.

In 1718, the French arrived and were followed by the Spanish approximately 50 years later. The French developed a thriving pelt industry as traders by taking advantage of cheap Indian labor and the area's natural supply of fur-bearing animals. Less successful in their exploitations than their predecessors, the Spanish gave way to the rising tide of American expansion and development. 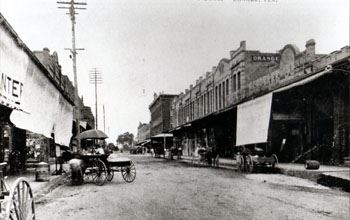 Early in the 18th century, the high banks on the Texas side of the Sabine River attracted early pioneers who dared to enter the land destined to be the Republic of Texas and afterward the State of Texas. This point on the Sabine River first was known as Green's Bluff as well as Huntley. It was named for a man by the name of Green who surveyed the first land plot on the site. There was also a time when the community was known as the Lower Town of Jefferson. At another time it was known as Madison, in honor of President James Madison, who then was serving his second term in office. Due to confusion with the town of Madisonville, Texas, it became necessary to give the growing community a new name. Because of the native orange groves that attracted the attention of boatmen as they navigated the Sabine River, the city was renamed Orange.

The town grew steadily as a strategic link between the east and west sections of the United States. It served as a port for cotton-carrying cargo ships sailing the Sabine River. Lumber, cattle, and agriculture also were important in the growth and development of the area.

The War Between the States, which lasted from 1861-1865, had disastrous effects on Orange by taking its toll on lives and property. When hostilities ceased, tragedy continued. A reign of terror marked by extreme lawlessness followed the end of the war, lasting for a decade. Additional hardships ensued in 1865 when one of the worst wind and rainstorms in Orange's history brought about even more death and destruction.

Although these events hampered the city's growth, ranchers were restocked with cattle, additional experiments were made in agriculture, and more lumber mills were built. Orange once again emerged on the path of development.

A big step forward for the city came in 1914 when the harbor was dredged to accommodate large ships. The operation was a great improvement to water transportation facilities and enabled the construction of ships during World War I. Wartime production resulted in a decided increase in the city's population. With the end of the war in 1918, Orange enjoyed several years of prosperity, only to be slowed once again by the Great Depression.

In the late 1930s and early 1940s, World War II had a dramatic impact on the city of Orange. Almost overnight the small town, with its some 7,000 residents, became a bustling "booming" city of approximately 60,000 residents. Shipyards began building ships again, and other local industries were expanded to meet tremendous wartime demands. A U.S. Naval Station was installed, and additional housing was provided for thousands of defense workers and servicemen and their families.

All of the growth in Orange during the war years did not disappear with the end of hostilities. Many people who came to the city during wartime stayed after it ended to make their homes and raise their families. After the adjustment was made from wartime production to peacetime output, the population in the Orange area stabilized at around 35,000. The shipyards, lumber mills, port, and Naval Station remained in the city, and by this time additional industries and businesses were being developed.

The city is located in one of the most promising industrial areas on the fast-growing Gulf Coast. Area industries include petrochemical products, steel fabrication, shipbuilding, rubber products, paper products, and plastics.

Today, Orange offers its citizens an array of employment, recreation, and shopping opportunities. The city continues to grow each day while hanging on to its signature small-town charm and world-class culture, ensuring a bright future lies ahead.